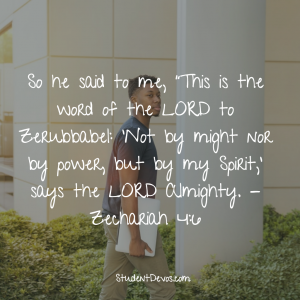 So he said to me, “This is the word of the LORD to Zerubbabel: ‘Not by might nor by power, but by my Spirit,’ says the LORD Almighty. – Zechariah 4:6 God never designed us to do things independently of Him. He designed us to know Him and out of that relationship, accomplish great things with His strength working in and through us. That’s what today’s Bible verse is saying. Zerubbabel was challenged not to fight a normal battle but to fight trusting God. He believed God that He would work on their behalf in a powerful, supernatural way. God wants the same for us. Instead of us just jumping out and accomplishing things in our own strength, God wants us to get Him involved in your situation. He has a better way to accomplish what you need. And when God is on your side, it’s better than what you could accomplish alone. With God on your side, you can accomplish more than you could on your own – @studentdevosClick To Tweet This doesn’t mean that we sit and do nothing, simply waiting on God to move us to try something. Rather, what it means is that when we do step […]

The post Daily Devotion and Bible Verse – Zechariah 4:6 appeared first on Devotions for Teenagers and Youth.